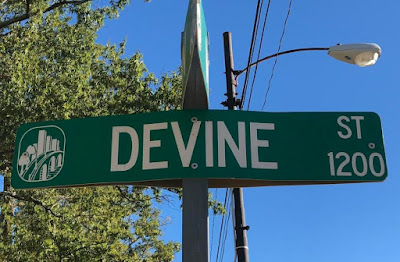 Was the name of one of Columbia’s original streets unofficially changed by a 1936 history book?

Helen Kohn Hennig’s edited collection, Columbia Capital City of South Carolina, 1786-1936, was published in 1936 as part of Columbia’s Sesquicentennial celebration.  The Sesquicentennial commemorated 150 years since the city’s founding in 1786.  The inside front cover of the Hennig edited book displays a 1931 map by Tomlinson Engineering that claims to be a copy of the original plan from the survey used in laying out the city streets in 1786. On the map the street’s name is spelled Devine, and there are 20th century handwritten notes in the margin of the map which state, "Devine has since been spelled in error D-i-v-i-n-e." (4, 13) However, no historical document or original source that supports this misspelling claim can be found.  In fact, if the name was misspelled, it was misspelled in official documents, news media, directories, and maps for over 140 years. Here are some examples.

In Columbia Capital City of South Carolina 1786-1936, the author of the first chapter states that “Devine” Street was “named for a citizen of the new town”. (4:9) He did not cite the source of this information.  That author, Alexander Samuel Salley Jr, was one of the most respected historians in the state of South Carolina for a half century.  He was the secretary, and for twenty years the only employee, of the Historical Commission of South Carolina, which was later renamed as the Department of Archives and History.  So, Salley’s credentials are stellar.  It is just unfortunate that he did not include a source citation for his statement that the street was spelled Devine and was named for an early citizen of Columbia.

In conclusion, it seems that a 1931 map and statements in Hennig's 1936 book made uncited claims that resulted in the change of the name of one of Columbia’s original streets.  This lack of citation leaves unanswered questions about the source of the information and reason behind the claim. So far, no pre-1931 references have been found to support the claim.

One thing this amateur historian has learned is that research is never complete.  Was there a citizen, family, survey employee, or other person named Devine in the early history of Columbia for whom the street was named?  No source has arisen to date that provides evidence of such an individual or family.  That does not mean it does not exist.  There was some reason that the Tomlinson Engineering Company and A S Salley believed Devine was the correct spelling.  There may be some letter buried in a library archive collection that has not yet been found which would support the claim that the street was originally named Devine.  Or it may have been someone’s assumption that somehow got accepted as fact.  We simple don’t know for sure.  Therefore, we must document what we do know and continue studying and researching.

Posted by Paul Armstrong at 9:24 AM