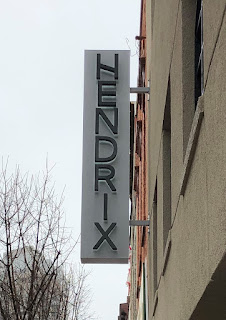 With the resurgence of Columbia's Main Street, some of the new businesses have taken names from the street's history.  Examples are Lula Drake and The Grand.  The latest to use this naming technique is Hendrix, a restaurant that plans to open soon at 1649 Main Street.  Here is the story of the grocery business from which the new restaurant has taken its name.

Joseph Austin Hendrix (1819-1895) and Solomon Nicholas Hendrix (1829-1906) were brothers from Lexington County who married sisters Elizabeth Feaster and Irene Feaster.  By 1868, Joseph and Solomon had moved to Columbia and were running a grocery store, J A Hendrix & Bro, on the east side of what is now the 1400 block of Assembly Street. The grocery store was operated in rented space in a building owned by Victoria Walker.

On July 3, 1870, fire destroyed the building on Assembly Street.  Fortunately, the grocery store’s losses were covered by insurance and they were able to quickly recover.  According to the Daily Phoenix, by July 6, J A Hendrix & Bro had moved the grocery business to the southwest corner of Richardson (now Main) and Blanding Streets which was commonly known as "Bryce's Corner". The building at that location had recently become vacant with the April 8, 1870 death of Richard Allen who had operated a grocery store there for about a year.

By 1888, S N Hendrix had moved from the Main and Blanding location to a building at what would later be addressed as 1530 Main Street. By this time, Solomon’s son-in-law, Edwin T Hendrix, had joined him as a clerk in the business.

In February of 1893, S N Hendrix moved two doors south to 1524 Main Street in the Fisher Building which was located on part of the property now occupied by the condominium building at 1520 Main Street.  This move was necessary to make way for the Canal Dime Savings Bank’s new building to be built at 1530 Main Street.

On February 19, 1904, Solomon N Hendrix sold the business to his son-in-law, Edwin T Hendrix, and retired. Edwin continued the business at 1637 Main Street and changed the store’s name to E T Hendrix.

In 1906, Edwin Hendrix purchased the property at 1649 Main Street and moved his grocery business there. The store was operated at this location as E T Hendrix until 1913.

In 1908, E T Hendrix’s son, Solomon Edwin “Chick” Hendrix graduated from the University of South Carolina and joined his father’s grocery firm. Chick took over responsibility for marketing and advertising. He also was quite creative in designing window displays.  In the fall of 1909, he designed and built a display modeled after a ferris wheel which was operating across the street as part of a traveling carnival.  Chick’s wheel was made of apples and wire and actually revolved using a series of pulleys connected to a motor in the basement of the store.  The ferris wheel’s cars were made of cranberries and wire and carried tiny dolls as passengers.  The Columbia Record noted that Chick’s display was very popular and may have attracted more attention then the carnival across the street.


In 1913, the grocery business was incorporated and renamed Hendrix, Inc.  It went public with an initial stock offering on September 11, 1913. E T Hendrix left the company to pursue other interests and Chick Hendrix took over operations.

Apparently due to financial difficulties, Hendrix Inc, was placed into receivership in the fall of 1924 and the store was closed on November 5. A new corporation, Hendrix & Company, was chartered on December 12 with S E Hendrix as president, E T Hendrix as vice president, and H G Brady as secretary. The store reopened on December 15, 1924 at the same location on the corner of Main and Blanding Streets but under the new cooperate name of Hendrix & Co.

In 1926, Hendrix & Co defaulted on their mortgage and the store closed for good.  In a series of mortgage sales, the company’s fixtures and other property were sold during December 1926 and January 1927.