by Paul Armstrong
Updated November 6, 2019
The Adluh brand has held a prominent position in the business culture of Columbia for over a century, and the Allen Brothers Milling Company plant just off Gervais Street is one of the most recognized icons of South Carolina’s capital city. My recent research on the history of the original Adluh Milling Company has revealed some interesting and surprising bits of information which are different than, or omitted from, the traditional stories of the Adluh history.  These include the company’s timeline, name origin, and ignoble demise.  Below is the story I discovered about the Adluh Milling Company which is, by and large, the story of a man named Bunyan R Cooner.  It is the story of Cooner’s time in Columbia and of two companies he formed and operated in South Carolina’s capital city: Columbia Grain and Provision Company (1906-1923) and Adluh Milling Company (1914-1924). 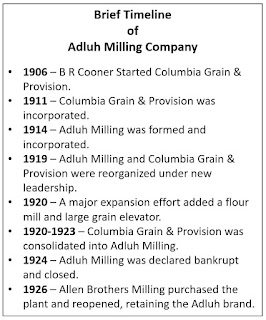 Bunyan Randolph Cooner was born in Edgefield County on January 11, 1872.  His parents were Nicholas Grange Cooner, a farmer and Baptist minister, and Martha Naomi Norris. By 1895, B R Cooner had moved to Columbia and was working as a bookkeeper.  In 1897 he joined with Edward A Beall to form a wholesale grocery business, Beall, Cooner, & Company, based at 701 Gervais Street.  In 1899, after his uncle, John B Norris, joined the firm and Edward Beal retired, the wholesale grocery partnership was changed to Norris, Cooner & Company.

In 1906 B R Cooner sold his interest in Norris, Cooner & Company and formed the Columbia Grain and Provision Company at 715 Gervais Street as sole proprietor.  The new company was a wholesale meal and feed business and a local agent for out-of-state flour mills and grain shippers.  In December 1909, Cooner purchased the 21,000 square foot brick warehouse building at 801 Gervais Street and moved the business to this new location in 1910.  The new building was conveniently situated beside a railroad spur running along the loading platform on the structure’s eastern side.

During his time as proprietor of Columbia Grain and Provision Company, Cooner was quite active in the business and social circles of the city, state, and region. He met Inez Irby of Halifax County, VA through her South Carolina relatives as she was related to former Senator John L M Irby of Laurens.  On June 18, 1910, B R Cooner and Inez Irby were married in Danville, VA and, after a long honeymoon through the midwestern states, they made their home in Columbia.  B R and Inez had two children, Marjorie (1912-1991) and Bunyan Randolph ‘Randy’, Jr (1914-1942).   (See note 1 below regarding Randy Cooner.)


In 1911, Columbia Grain and Provision Company was converted from a sole proprietorship and incorporated with capital stock of $25,000.  B R Cooner was installed as president & treasurer and Marion M Platt as vice-president & secretary.  Platt was previously a wholesale fruit and produce sales person for the E M Dupre Company.  Then, in 1912, Jesse H Hardin, formerly with Moffat Grocery Company in Chester, SC, moved to Columbia and joined Columbia Grain and Provision Co as clerk and bookkeeper. (See note 2 below regarding Jesse Havries Hardin, Jr.)

B R Cooner had seen a need to have a grain mill within South Carolina to serve local farmers’ and keep them from having to process their grain products out of the state.  So, the Adluh Milling Company was formed in 1914 with Cooner as president/treasurer and Jesse Hardin as secretary.  According to The State newspaper, by September of 1914 Adluh Milling Company had occupied a building at the rear of 804 Gervais Street which was 198 feet in length and 94 feet wide with half of the building being three stories high.  The newspaper article indicated that the new mill’s capacity was “1,200 bushels of meal and 60 tons of horse, cattle, dairy, hog and poultry feed”.  The building, which was adjacent to the Southern Freight yards, was behind the Thomas and Howard wholesale grocery business at 804 Gervais Street.


The previous year, in 1913, the Columbia Shriners had formed a drum corps to accompany the club and represent them at events throughout the state.  Pierre Mazyck, a single parent whose only child was a daughter named Hulda, was named captain of the Shriners’ drum corps.  Mazyck named it the Adluh Drum Corps using the reverse spelling of his daughter’s first name. Eight-year-old Hulda Mazyck became the mascot of the drum corps and led their procession when they performed at parades and other events.  According to the Columbia Record, Cooner, who was a Shriner, liked the name and asked Pierre Mazyck if he could use it as the name of his new company.  Pierre and Hulda were flattered and agreed.  So, in 1914, the “little girl with big blue eyes and a head covered with bright golden curls” became the namesake for the new Adluh Milling Company.  Then in 1915, as an additional salute to Hulda Mazyck and the Adluh Drum Corps, the company began using a logo on its products that displayed the image of a drum with the likeness of a girl in its center.  A pair of crossed drum sticks were added to the top of the logo by the mid-1930s. (See note 3 below regarding Hulda Witte Mazyck.)

The Adluh Milling Company became successful and began to expand.  In 1916, an office building was added to the property.  That same year, the Columbia Grain and Provision Company, which had been abandoned for two years as Cooner focused on the milling business, was reestablished.  Cooner turned the wholesale grain business over to his younger brother, Rhodes H Cooner, as the new president and general manager, along with H Miller Williams who was secretary of the company.  At this time Columbia Grain and Provision Company was represented by two salesmen for a line of products that included being the exclusive regional agents for Adluh Milling Company.

For the first three years, Adluh Milling focused on producing table meal and feed products from corn with a limited production of flour.  In 1917, they broke ground for the building of a new velvet bean mill to increase their capacity for producing this new type of dairy cattle feed they had begun offering a year earlier.  The bean feed mill went into production in late May of 1918 bringing the company’s daily capacity to 1,200 bushels of table meal and 60 tons of livestock feed.

The new board quickly announced big plans for the Adluh Milling Company which included the construction of a flour mill and a grain elevator. The elevator was constructed of reinforced concrete with a height of 123 feet and a capacity of 43,00 bushels with seven compartments for storing different types of grain.  It was completed by May of 1920.  The flour mill was built by Nordyke & Marmon of Indianapolis, IN and was completed by September 1920 in a building constructed of steel and wood.  This expansion brought the company’s plant complex to six buildings: two warehouses, the flour mill, the meal and feed mill, the elevator, and the office building.

Apparently, the aggressive expansion during 1919 and 1920 took its toll on the company financially.  In July of 1924, under pressure from creditors, the Adluh Milling Company was declared bankrupt by the US District Court and the plant was closed.  The property was tied up for two years by several civil court actions until, in June of 1926, it was put up for bankruptcy sale by the receiver, J R McMullan, representing the National Loan and Exchange Bank.  Later that summer, it was announced that Allen Brothers Milling Co of Wadesboro, NC had purchased the Adluh Mill which they brought to full operations by August 23 with an increased capacity for flour from 150 to 200 barrels per day.

In the meantime, B R Cooner had established a new company, B R Cooner, Inc, which acted as a broker and commission merchant serving as distributor and selling agent for products such as Pillsbury’s Best Flour and Texas Red Rust Proof Seed Oats. In 1926, the Cooner family moved to Asheville, NC, where they had previously maintained a second home.  B R Cooner continued his business for a while as a broker for grain products and added fruit to his product line. He later went to work as a traveling salesman representing Mountain City Mills of Chattanooga, TN.  After suffering for several years with failing health, B R Cooner was admitted to the Kelly Sanitarium in Kingstree, SC, where he underwent surgery for an acute intestinal obstruction.  He died the following night, October 13, 1930, and was buried at Batesburg Cemetery in Batesburg, SC.

The Adluh brand Cooner created was retained by Allen Brothers Milling Company which operates at 804 Gervais Street to the present day.  According to their website, the Allen Brothers’ Adluh Flour Mill is South Carolina’s only operational flour mill and the plant is listed on the National Register of Historic places.  Their flour, grits, corn meal, and other merchandise can be purchased online, in person at their office on Gervais Street, or at various retailers.  Their products may also be enjoyed at restaurants throughout the eastern half of the United States.


1. Randy Cooner graduated from Asheville School for Boys and the University of North Carolina in Chapel Hill and then served as a carrier-based Navy pilot during World War 2.  He was killed in a plane crash during non-combat flight operations out of Pearl Harbor on June 16, 1942.  He was posthumously awarded the Navy Cross for heroism during the Battle of Midway less than two weeks before his death. On July 23, 1943, the USS Cooner, a Cannon-class destroyer escort, was launched and christened in honor of Ensign Bunyan R Cooner, Jr.

2. Jesse Havries Hardin, Jr was born in Chester County in 1876 and served as a sergeant in the 1st South Carolina Infantry during the Spanish American War.  After the war he returned to Chester and worked for Moffatt Grocery Company as a bookkeeper.  In 1909, he married Carrie Simrill of York County and they moved to Columbia in 1913.  Jesse worked for Columbia Grain and Provision Company and Adluh Milling Company for two years.  In 1915, he and Carrie moved back to Chester County for Jesse to take over management of his deceased father’s farm.  Back in Chester he served as county game warden, Chester City Recorder, insurance agent, and elder of Purity Presbyterian Church.  He died of a self-inflicted gunshot wound to the head on Mar 15, 1946 at his home in Chester County.  It was ruled a suicide. He was buried at Evergreen Cemetery in Chester, SC.

3. Hulda Witte Mazyck, the “little girl with big blue eyes and a head covered with bright golden curls”, grew up in Columbia’s Shandon neighborhood and then went to nursing school at Petersburg Hospital School of Nursing in Petersburg, VA.  After nursing school, she moved to Muskogee, OK to live with her maternal aunt, Mary White. Hulda worked as a registered nurse in Muskogee – at a doctor’s office and later a hospital – until her aunt died in 1942. She then moved back to South Carolina and lived with her father, who had moved to Charleston, until his death in 1951.  Hulda Mazyck never married and lived the rest of her life in Charleston where she died on Nov 26, 1991 at 86 years of age.  She was buried alongside her parents in Magnolia Cemetery in Charleston.

Posted by Paul Armstrong at 6:14 PM