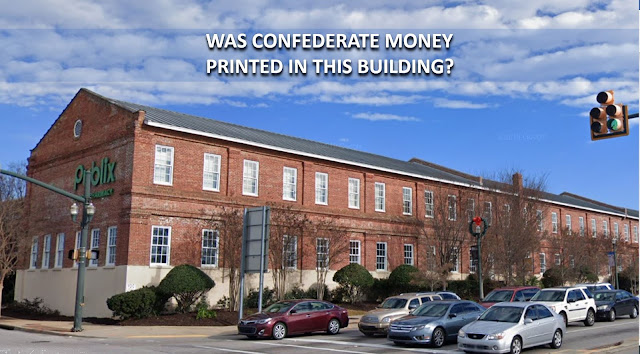 After treasury note operations were relocated from Richmond to Columbia, Treasury Secretary Memminger soon realized the three firms there were not able to satisfactorily meet the demand.  Jealousy and friction between the contractors caused serious management issues for the Treasury Note Division. So, in October 1862, Memminger asked Evans & Cogswell to establish a branch plant in Columbia and take on a contract for printing Confederate currency. Evans & Cogswell agreed and set up a printing plant for this purpose on the second floor of the Kinsler Building at the northwest corner of Main and Taylor Streets.  The building, located where Mast General Store is now, had a spacious hall on the second floor which had previously served as a venue for banquets, balls, operas, plays, etc.  This location was especially convenient for Evans and Cogswell since the Confederate Treasury Note Division/Bureau operated out of offices on the third floor of the same structure.

Then, in August 1863, Union artillery began a bombardment of Charleston that would last until the end of the war.  Artillery batteries, built in the marsh of Morris Island, rained deadly incendiary shells down on all parts of Charleston south of Calhoun Street.  When the State Bank building next door to Evans & Cogswell was hit, the printing firm decided Charleston was no longer safe and that they should move all their operations to Columbia.
So, Evans & Cogswell secured property on the north side of Gervais Street between Pulaski and Huger Streets, put up four brick walls, covered half the structure with a roof, and finished that half.6  They set up a printing plant in the finished part of the building, and moved their non-treasury note operations into this new facility. They continued printing Confederate currency in the Main Street facility and used the Gervais Street building for the other part of their business that had previously been done in Charleston.  By February 15, 1864, they were advertising their new plant capabilities and the publication of some 20 books including Chisolm’s Surgery by Julian J Chisolm and Phillip, a novel by William H Thackeray.  They also had a contract to print 100,000 New Testaments for the Confederate States’ Bible Society. All total in the combined Columbia facilities, Evans & Cogswell could boast of 72 printing presses and 24 binding machines.

The End
With Sherman’s army approaching Columbia in February 1865, the Confederate Treasury Bureau, along with the Evans and Cogswell firm, evacuated Columbia and eventually made their way to Anderson, SC.  They were able to successfully transport approximately thirty-five printing presses from Evans & Cogswell’s plant, the engraving plates from Keatinge and Ball, and a small amount of ink, paper and other supplies.  However, before treasury note operations could be put in operation in the new location, the Confederacy had collapsed.

Summary
The Confederate government did not own or operate facilities for engraving or printing currency.  Instead, they contracted with private companies for the engraving and printing of treasury notes.  Four of these companies produced Confederate treasury notes at plants located on Main Street in Columbia between 1862 and 1865.  One of these companies also built a plant on Gervais Street for their general publishing business.  Confederate currency engraving and printing took place on Main Street, not in the Gervais Street building where Publix and Estates on Gervais are now located.