A look at baseball during its earliest years in Columbia including the city’s first organized game, the first games at the State Fair, and some of the early amateur teams in South Carolina’s capital city.

Prior to the Civil War, there was at least a basic awareness of baseball in South Carolina, and the newspapers around the state reported on the northern clubs playing the “national game”.1,26,47 However, those in the Palmetto State who had the time and resources primarily pursued other leisure activities such as marksmanship, archery, horse racing, fives (similar to handball), boxing, wrestling, etc. If baseball was played in the state before the war, it was probably in informal, pick-up games and not between organized teams.

The Civil War gave South Carolinians direct exposure to the game of baseball in several ways.13 Some soldiers from the state who were interned in Union POW camps learned the game from their captors and experienced it firsthand as part of their outdoor exercise routine.29 Others, who served as guards at certain Confederate prisons, witnessed the game being played by the northern soldiers held there.13 Also, South Carolina residents who lived in the Union occupied areas of Beaufort county observed regular matches between baseball clubs comprised of northern soldiers.27 But organized baseball did not come to the state capital until after the war was over. Contemporary newspaper articles indicate that the game arrived here in response to a challenge by northern troops occupying Columbia during Reconstruction.

The newspaper reported that “the maiden game of base ball in Columbia” was played between the Phil Sheridan and Chicora clubs on September 9 from 2:15 to 6:15 PM on the University Green. The military club won by a score of 82 runs to 29.8,44 The lopsided score apparently did not discourage the Chicoras who agreed to future contests versus the Phil Sheridans. Over the next two months, the Phil Sheridan and Chicora clubs played a series of five games with the military club winning all but one.30,10,11,45 The Chicoras finally achieved a victory over the military team in the fourth matchup on October 31 by a decisive score of 89-51.11

Other games were played that year among the local teams on at least three baseball fields around the city.  The Phil Sheridan and University Clubs used the University Green along Green Street as home field, while the Columbia Club’s home ground was near the Charlotte and South Carolina Railroad Depot in the northeastern part of the city.  The Chicora Club maintained a field behind the South Carolina Railroad Depot on Gervais Street. The fact that these were organized clubs is evidenced by the facts that they were managed by officers and directors and held regular off-field meetings.2,3,7,16,18,32
Also in 1867, Columbia’s first two youth baseball teams were formed. These were the Richland and Columbia, Jr. clubs who played their first game against each other on October 22.  This first ‘little league’ game was won by Columbia Jr. by a margin of four runs.4

Beyond 1867, baseball continued to grow in popularity among players and fans. Additional teams were formed, and games became more common in subsequent years especially during holidays and special events. Fourth of July celebrations began to feature baseball games along with the traditional picnics and fireworks.15,28,48 Other events also began to include baseball games in their activities.

The 1871 South Carolina State Fair featured two baseball games played on the infield of the racetrack adjacent to the fairgrounds on Upper Street (now Elmwood Avenue).  The first was played at 11:00 AM on Wednesday, November 8, by two local teams, the R. E. Lee and Alert Baseball Clubs. By a score of 23-14, the Alerts won what was possibly the first team sport contest featured at the State Fair.49 The second game, between the local Palmetto Club and the Mutual Club of the military garrison, began at 11:00 AM on Thursday and was halted after five innings by a rainstorm.50 It was completed on Friday and the Mutuals were victorious.  The winning club in each game was awarded a $10 prize by the fair association.42 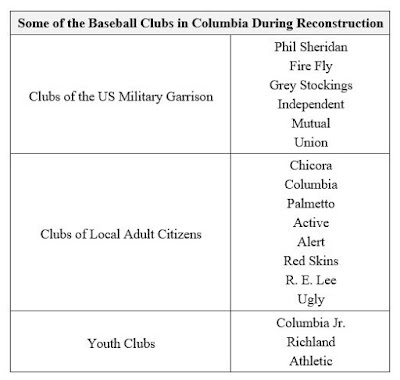 The sport continued to grow during the Reconstruction Era as local and military clubs continued to be formed while some came and went. At least six military clubs, eight local adult clubs, and three youth clubs existed at various times between 1867 and 1877. Local Columbia clubs also began to host and travel for games against teams in other towns and cities around the state. Some of these intercity games were against teams like the Orange of Orangeburg, the Klu Klux of Winnsboro, the Athletics of Aiken, the Etiwans of Charleston, and others. This intercity competition continued beyond Reconstruction into the 1880s and 1890s but on an inconsistent basis. These teams and competitions waxed and waned depending on several factors such as financial means, player commitment, inconsistent management, etc.

Columbia’s local teams were primarily amateur and were composed of part-time players who held other means of livelihood. There were, however, some occasional semi-professional exceptions where a team would compensate one or two players. The primarily amateur nature of the game continued until 1892 when the Columbia Baseball Association formed Columbia’s first professional team and led the effort to start the first minor league involving South Carolina clubs. An upcoming article about Columbia’s first professional, minor league team will soon be posted to this blog. 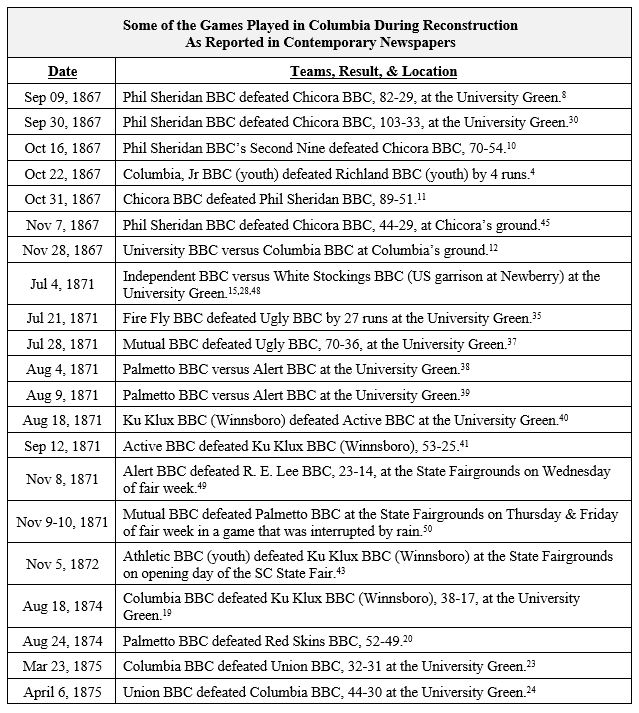